What do you get if you mix Charles Mingus, Squarepusher, EPMD, Django Reinhardt, Thelonious Monk and Boards of Canada? Apart from the best mixtape ever, you get some idea of what Jaga Jazzist sounds like. Formed by two brothers, Martin and Lars Horntveth, in Norway in 1994, Jaga Jazzist has grown from being a side project while the brothers were in a pop group, to touring the world, releasing critically acclaimed album on Ninja Tune and performing with the 25 piece Britten Sinfonia.

Their second album, A Living Room Hush, released in 2001 brought them to the attention of the world, as the BBC said it was the best jazz album released that year. Even now thirteen years later, A Living Room Hush still sounds like an insight into jazz’s future, yet hinting at it’s past. Opening track Animal Chin sounds like a fairground carousel, being run by psychotic and demented clowns and organ grinders. While the intensity is slowly heightened with each rotation of the carousel, there is no threat of malice or danger. It’s good clean fun. Airborne is a glitch-tastic jaunt through laidback, and at times romantic riffs, until the maelstrom at the end leads to a beautiful outro. Low Battery is one of the most traditional tracks on the album. It’s a slow building horn track, but there is plenty bubbling under the surface to keep you on your toes. Mingus and Monk would approve!

To commemorate this monumental event Ninja Tune, Jaga’s home since 2001, have decided to release a boxset. Like all Ninja Tune boxset’s, it sublime. It consists of a re-issue of A Living Room Hush on limited edition coloured vinyl, and two bonus coloured 12” records of re-working of classic Jaga tracks. 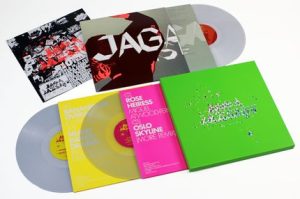 One of the standout tracks is Clark’s remix of Banafluer Overalt. What Clark does effortlessly is to take a mellow track, and cherry pick a few elements from it, mix it perfectly with a funky beat and bassline to create something that never deviates from the original’s vibe, but has a dance floor sensibility. As Christmas is coming up, why not buy this for that jazz electronic music fan your life.